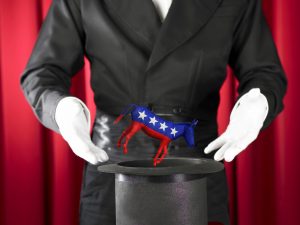 Back in May 2003, there was a redistricting plan scheduled for a vote in the Texas legislature, and it resulted in the mass disappearance of fifty-three Democrat legislators.

It was a major story in Texas and went national, with some antics and possibly shady goings-on as well. I’m going to give you some information and quotes here from various online and news sources that I cannot verify as accurate. What I can verify is how these missing legislators were actually located through my firm’s involvement.

The proposed redistricting plan would have resulted in more Republican seats in the legislature, something the Democrats definitely didn’t want. There weren’t enough Democrats to keep the plan from passing, but there were enough to keep it from coming to a vote. The story hit the news nationally when fifty-three Democrats went missing, depriving the Republicans of the quorum they needed to bring the issue to a vote.

They say everything’s big in Texas, and a bunch of missing Democrats and the story were a big deal at the time. Republicans put Democrat lawmakers’ pictures on milk cartons and decks of playing cards. It was like they were seeking terrorists or lawbreakers.

Under the Texas Constitution, a majority of members can vote to compel the presence of enough members to reach a quorum. The Republicans immediately did so, and they sought out law enforcement to help them to find the missing legislators.

The Texas Department of Public Safety’s website even issued an Amber Alert-type of notice to citizens to assist in locating the Democrats so they could be rounded up and returned for a vote. The legislators’ names were posted and a toll-free phone number created for reports of their whereabouts.

You can get a free pdf copy of this book at the link above to see how that case turned out. This Houston private investigator intends to continue serving Texas and the nation well into the future.

Posted in Corporate Services, In the News, Surveillance.