The program allows people and businesses to register their exterior surveillance camera systems so that, in the event of a crime near their home or business, the police may contact the system owner to see if their camera(s) possibly recorded an event relevant to the investigation.

On January 14, 2020, the Supreme Court heard oral argument in Romag Fasteners, Inc. v. Fossil Inc., et al., in which the Court is poised to resolve a circuit split on whether willfulness is a perquisite to award a trademark infringer’s profits.

Counsel for Romag framed the issue by negating defendant’s chief textual argument, i.e. that the phrase “subject to principles of equity” in 15 U.S.C. § 1117(a) does not import a willfulness requirement for disgorgement of an infringer’s profits. Yet Counsel also focused on Romag’s own textual argument, based on the 1999 Amendments to the Lanham Act, i.e. that Congress’ decision to use “willful” to modify 1125(c) dilution claims, but not 1125(a) infringement claims, evidences Congress’ intent to eschew a willfulness requirement in the latter….

SALEM — An Oregon county was struggling Thursday to get its computer and telephone systems running again after it was hit by a cyberattack. a week after a nearby city lost data and computer programs in another apparent attack.

“All computer systems are offline at this time, our website is down and the phones are working intermittently,” Tillamook County officials announced in a statement. At a meeting Wednesday, the day the attack was noticed, county officials referred to it as a ransomware attack, according to Laura Swanson, a local reporter who was present.

KIS has expanded our investigative coverage areas to include numerous additional Texas Counties and Cities, while continuing to coordinate investigations nationwide.

We will be exhibiting at the ABA Section of Family Law 2016 CLE Conference October 19th – 20th in Quebec, Canada.

By Miya Shay
Monday, November 16, 2015
HOUSTON (KTRK) — Anastasia and Dmitry Gudkov know all too well about threats and violence in their homeland.

“It’s a difficult situation in my homeland, Ukraine,” said Anastasia.

So when the attacks struck Paris, they were relieved to be in Texas.

“It could happen anywhere,” said Dmitry, “But we feel much safer here, than be in Europe, and Europe is much prone to terror attacks because so close to the Middle East.”

Rob Kimmons, a local security expert, says even though the security risk may be lower in the United States, it’s always important to be prepared.

“Put a plan in mind just as if you’re on an airplane, what you’re going to do, if something happens. Where are the exits, where are the security checkpoints,” said Kimmons.

Kimmons says it’s not a matter of if, but when, a terrorist attack will occur on US soil again. His advice, even for people who conceal and carry guns, to always run from a threat first.

“Fleeing is the first option, hiding is the second, if you hide you need to be quiet, turn off the ringer.”

Meanwhile, the Harris County Sheriff’s Department says it is in constant communications with state and federal authorities, however there is no active credible threat.

“We have not yet identified any threats that would cause us to heighten our state of alert or readiness if you will. There an ongoing effort to maintain terrorist watch activities in the area,” said Sheriff Ron Hickman.

By Jessica Willey
Friday, April 08, 2016
HOUSTON (KTRK) — A Houston widow was swindled out of thousands of dollars by a man she met on Facebook.

The 74-year-old wants to remain anonymous because she’s embarrassed but she also wants to tell her story to warn others. There are hundreds of online dating scams and she is now a victim.

“She was actually the third (client). I had two others and they lost more,” said Rob Kimmons, a former Houston police officer turned private investigator. Even Kimmons is surprised by how rampant the scam is.

The woman says she got a friend request on Facebook from a man calling himself Brock Carl. They first communicated on Facebook. He would also comment on posts she had commented on and they hadmutual friends, or so she thought.

“He was very carefully and very professionally insinuating himself into my life,” she said.

The two eventually started talking on the phone. It was three months before he asked for money saying it was for a business deal in India. He sent her a copy of what she thought was his passport. It earned her trust. By then, she also thought she was in love.

She sent him more than $60,000 in several wire transfers. None of it was real. After investigating, Kimmons believes the money went to Nigeria.

“If you’ve never met them and you’re talking on social media and they ask for money, stop it right there,” Kimmons said.

This victim has lived and learned.

“I hate it. I’m sorry I got sucked in, but I won’t lose another penny. I would assure you that.” 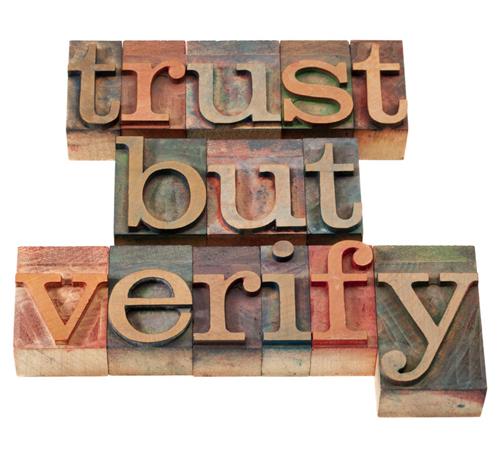 Ronald Reagan gave us this quote, and it is a reality in a world full of “reality TV.”  We all know that wrestling is staged, and we know that reality TV is a whole lot of made-up stuff too.  We choose to enjoy these things anyway, but we do so with a knowing that it’s not real.

We all want to live in a world where we feel that we can trust people around us.  Those of us who are business owners or managers are tasked with managing through delegation to others.  Especially after a number of years we come to know and trust long time employees.  Unfortunately, a short-circuit can develop in this trust conduit.  Your trust is abused in ways that can be quite costly.

Corporations and even small businesses have become accustomed to doing background checks on job applicants and new hires.  Some do a simple Internet search, others hire firms like Kimmons Investigative Services, Inc. to do thorough checks, and many do something in between.  This is an effective approach to avoid hiring the wrong person.  But, we all know that life changes, and business changes right along with it.  Five years from now, will that employee you checked at hire still be the same person with nothing negative in their background?

Too many businesses have found out the hard way that change is happening all around them, and their employees are experiencing life changes that can dramatically alter their personalities or what they feel they must do to survive in their new world.  Financial adversity has changed many employees from loyal and honest into petty thieves or far worse.  Companies with trade secrets or sensitive information are particularly vulnerable if their competition offers incentives to struggling employees to share that information.

In our business it is not uncommon to sit across the boardroom conference table talking to a shocked executive who just found out through our investigation that a trusted employee has been stealing from them for some time.  Many times it is someone who has been with the company for a decade or more.  The more you have to protect, the more you need to hire professionals to do scheduled background checks of existing employees, even middle and upper management.

By scheduled we don’t mean advertised.  We are scheduled to periodically conduct these employee background checks, but the schedule is secret and if nothing derogatory is found, your employees need never know about them.  It is just sound business practice that can save you far more than it costs.  Sometimes it can save a company.